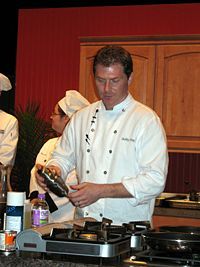 Bobby Flay opened his first restaurant, Mesa Grill, in 1991 and quickly developed a following for his innovative Southwestern cuisine. The restaurant continues to get high marks in The Zagat Survey for its regional American cuisine and has spawned two offshoots, Mesa Grill in Caesar's Palace in Las Vegas and Mesa Grill Atlantis in the Bahamas. Bobby opened Bolo in 1993, Bar American in 2005, and Bobby Flay Steak in 2006. He is also the food correspondent for The Early Show on CBS and has hosted numerous popular cooking shows since his debut on Food Network in 1996, from the Emmy-nominated Boy Meets Grill to the Iron Chef America Series and Throwdown with Bobby Flay. This is his seventh book.