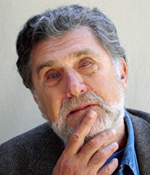 Tim Wilson did his undergraduate work at Williams College and Hampshire College and received his PhD from the University of Michigan. Currently Sherrell J. Aston Professor of Psychology at the University of Virginia, he has published numerous articles in the areas of introspection, attitude change, self-knowledge, and affective forecasting, as well as a recent book, Redirect: The Surprising New Science of Psychological Change. His research has received the support of the National Science Foundation and the National Institute for Mental Health. He has been elected twice to the Executive Board of the Society for Experimental Social Psychology and is a Fellow in the American Psychological Society and the Society for Personality and Social Psychology. In 2009, he was named a Fellow of the American Academy of Arts and Sciences. In 2015 he received the William James Fellows Award from the Association for Psychological Science. Wilson has taught the Introduction to Social Psychology course at the University of Virginia for more than 30 years. In 2001 he was awarded the University of Virginia All-University Outstanding Teaching Award, and in 2010 was awarded the University of Virginia Distinguished Scientist Award. Robin Akert graduated summa cum laude from the University of California at Santa Cruz, where she majored in psychology and sociology. She received her PhD in experimental social psychology from Princeton University. She is currently a Professor of Psychology at Wellesley College, where she was awarded the Pinanski Prize for Excellence in Teaching early in her career. She publishes primarily in the area of nonverbal communication, and recently received the AAUW American Fellowship in support of her research. She has taught the social psychology course at Wellesley College for nearly 30 years. Sam Sommers earned his B.A. from Williams College and his Ph.D. from the University of Michigan. Since 2003 he has been a faculty member in the Department of Psychology at Tufts University in Medford, Massachusetts. His research examines issues related to stereotyping, prejudice, and group diversity, with a particular interest in how these processes play out in the legal domain. He has won multiple teaching awards at Tufts, including the Lerman-Neubauer Prize for Outstanding Teaching and Advising and the Gerald R. Gill Professor of the Year Award. He was also inducted into the Tufts Hall of Diversity for his efforts to promote an inclusive climate on campus for all students. He has testified as an expert witness on issues related to racial bias, jury decision-making, and eyewitness memory in criminal trial proceedings in seven states. His first general audience book on social psychology was published in 2011, titled Situations Matter: Understanding How Context Transforms Your World. His next book, titled Your Brain on Sports, is co-authored with L. Jon Wertheim of Sports Illustrated and will be published in early 2016. chevron_left Read Less