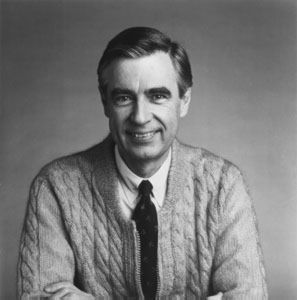 Frederick McFeely Rogers (1928-2003) was the host of the internationally acclaimed children's television show Mister Rogers' Neighborhood, in production from 1968 to 2001. Mister Rogers, as he became known to millions, was an ordained minister of the Presbyterian Church (USA) who lived and worked in the Pittsburgh, Pennsylvania area for most of his life.Rogers' show won four Emmy awards, including one for lifetime achievement. He also received a Peabody Award, in recognition of 25 beautiful years in the neighborhood. On July 9, 2002, Fred Rogers received the Presidential Medal of Freedom for his contributions to children's education. Fred Rogers has proven that television can soothe the soul and nurture the spirit and teach the very young, said President George W. Bush at the presentation.Fred Rogers was born in Latrobe, Pennsylvania, about 30 miles southeast of Pittsburgh. He studied early childhood development at the University of Pittsburgh.