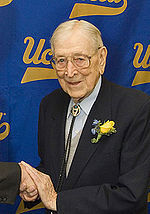 Author Profiles During the course of a 12-year span, John Wooden (1910-2010) led the UCLA Bruins to ten NCAA basketball championships, including four perfect seasons and an 88-game winning run. He was selected ESPN's Greatest Coach of the 20th Century and The Sporting News' #1 Coach of All Time. There has never been a greater man in American athletics, or a finer coach, than John Wooden, according to Sports Illustrated. John Wooden received the Presidential Medal of Freedom in 2003. Steve Jamison is the foremost author and authority on John Wooden's life and ideas in the United States.

Jamison works as a consultant for the John Wooden Global Leadership Program at UCLA Anderson School of Management. Coach Wooden and he worked on an award-winning PBS special as well as multiple books, including Wooden: A Lifetime of Observations and Reflections, a classic book on teaching and mentoring.