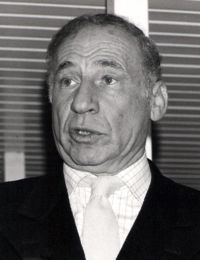 Mel Brooks is a filmmaker, screenwriter, comedian, actor, producer, composer, and songwriter from the United States. The Producers, The Twelve Chairs, Blazing Saddles, Young Frankenstein, Silent Movie, High Anxiety, History of the World, Part I, Spaceballs, and Robin Hood: Men in Tights are among Brooks' most well-known film farces and comedy parodies. Most recently, he had a Broadway smash hit with The Producers, a musical adaptation of his debut picture. He was awarded a Kennedy Center Honor in 2009, the 41st AFI Life Achievement Award in June 2013, and a British Film Institute Fellowship in March 2015, making him an EGOT recipient. For AFI's 100 Years, three of Brooks' classics are featured.