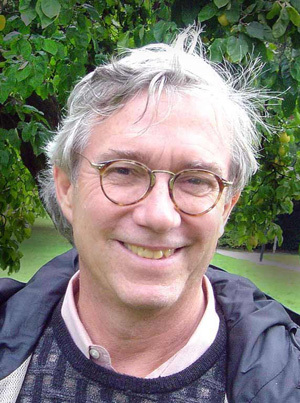 Rudy Rucker is a writer, mathematician, and computer scientist, with thirty-two published books. In the 1980s, he received Philip K. Dick Awards for his cyberpunk novels Software and Wetware. He took up painting in 1999 and has had three shows of his pop-surreal works in San Francisco. His fantastic novel of the afterlife, Jim and the Films, appeared in 2011, as did his memoir, Nested Scrolls: A Writer's Life. Rucker is presently working on a 1950s science fiction novel called The Turing Chronicles, featuring a love affair between computer pioneer Alan Turing and Beat author William Burroughs. Rucker also edits the speculative fiction webzine Flurb. Recent works include his autobiography, Nested Scrolls; a book of his paintings, Better Worlds; a science fiction novel, The Big Aha; and a new edition of his Kerouac-style novel All the Visions. For ongoing updates and numerous links, see Rudy's blog at www.rudyrucker.com/blog. Follow Rudy on Twitter as rudytheelder.