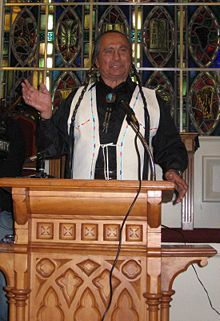 Russell Means (1939-2012), was a renowned political activist for the rights of American Indian people in the United States, Central and South America, and internationally through the United Nations.

Born an Oglala/Lakota, he was raised on the Pine Ridge Indian Reservation near the Black Hills, and then in Vallejo, California. He also appeared frequently on television programs and series, as well as alongside Daniel Day Lewis in the film The Last of the Mohicans. Toward the end of his life, Means divided his time between Chinle, Navajo Nation, Arizona, and Porcupine, North Dakota, among an extended family that included seven children, thirty-three grandchildren, and thirty great-grandchildren.