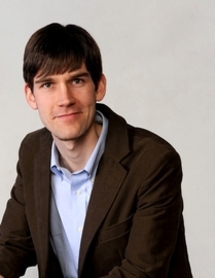 Sam Kean is the author of The Story of the Dueling Neurosurgeons, The Disappearing Spoon, and The Violinist's Thumb, all of which were selected top scientific books of the year by Amazon. The Disappearing Spoon was a finalist for the Royal Society of London's book of the year award in 2010, while The Violinist's Thumb and The Story of the Dueling Neurosurgeons were both shortlisted for the PEN/E.O. Wilson Award. In 2013 and 2015, he won the Wilson Award for poetic science writing, as well as the AAAS/Subaru Prize. His work has been featured on NPR's Radiolab, All Things Considered, and Fresh Air, as well as in The Best American Nature and Science Writing, the Atlantic Monthly, the New York Times magazine, Psychology Today, Slate, Mental Floss, and other publications.