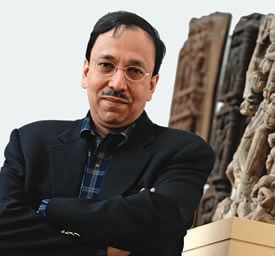 Sugata Bose is the Gardiner professor of history at Harvard University. He was educated at Presidency College, Calcutta, and the University of Cambridge where he obtained his PhD and was later a fellow of St Catharine's College. Before taking up the Gardiner Chair at Harvard in 2001, he was professor of history and diplomacy at Tufts University. Bose was a recipient of the Guggenheim Fellowship and gave the G.M. Trevelyan Lecture at the University of Cambridge.

Bose, who is Netaji's brother Sarat Chandra Bose's grandson, is the author of many books, including Peasant Labour and Colonial Capital and the much-acclaimed The Nation as Mother and Other Visions of Nationhood and A Hundred Horizons: The Indian Ocean in the Age of Global Empire. He has also made documentary films on South Asian history and politics and published recordings of his translations of Tagore.