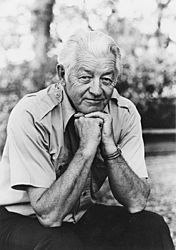 Although his fiction deals with many universal themes, Stegner is primarily recognized as a writer of the American West. Much of his literature deals with debunking myths of the West as a romantic country of heroes on horseback, and his passion for the terrain and its inhabitants have earned him the title 'The Dean of Western Letters'. He was one of the few true Men of Letters in this generation. An historian, essayist, short story writer and novelist, as well as a leading environmental writer. Although always connected in people's minds with the West, he had a long association with New England. Many short stories and one of his most successful novels, Crossing to Safety, are set in Vermont, where he had a summer home for many years. Another novel, The Spectator Bird, takes place in Denmark.

An early environmentalist, he actively championed the region's preservation and was instrumental-with his now-famous 'Wilderness Letter'-in the passage of the 1964 Wilderness Act. Honest and straightforward, educated yet unpretentious, cantankerous yet compassionate, Wallace Stegner was an enormous presence in the American literary landscape, a man who wrote and lived with ferocity, energy, and integrity.
Jackson J. Benson teaches American Literature at San Diego State University. His biography, The True Adventures of John Steinbeck, Writer, won the PEN USA West award for nonfiction. He lives in La Mesa, California. chevron_left Read Less