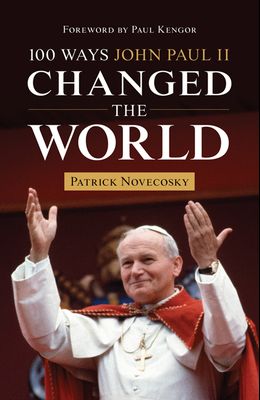 From the front Cover There is no evil to be faced that Christ does not face with us. There is no enemy that Christ has not already conquered. There is no cross to bear that Christ has not already borne for us, and does not now bear with us. Pope Saint John Paul II embodied these words throughout his life. Born May 18, 1920, in Wadowice, Poland, Karol Jzef Wojty¬&#130;¬a lived in times of political turmoil. As a young man during the Nazi occupation of Poland, he studied in an underground seminary. As pope, he was instrumental in the collapse of communism in Eastern Europe. Through it all, he maintained an unwavering hope in the ultimate triumph of love, truth, and beauty. He remains a hero to millions of people for his unflinching defense of the Church and her teachings. John Paul II changed the world forever in many ways; this book describes 100 of the most important. Each of the 100 accomplishments, teachings, or stories about John Paul II is fascinating, providing a glimpse into the astounding life and impact of this great and beloved saint. ABOUT THE AUTHOR Patrick Novecosky is one of America's most accomplished Catholic communicators. The winner of more than two dozen awards from the Catholic Press Association, he has edited and written for some of America's top Catholic publications. Patrick is managing partner at NovaMedia, a marketing firm specializing in the Catholic space. He met Pope Saint John Paul II five times, and he has made Pope Francis laugh out loud. Most importantly, he is a husband and father of five beautiful children.