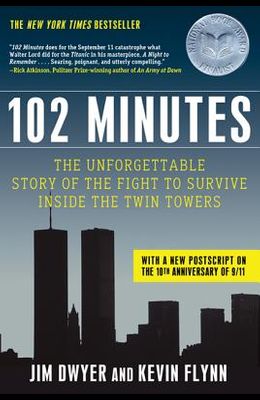 102 Minutes: The Unforgettable Story of the Fight to Survive Inside the Twin Towers

by
Jim Dwyer and Kevin Flynn

102 Minutes does for the September 11 catastrophe what Walter Lord did for the Titanic in his masterpiece, A Night to Remember . . . Searing, poignant, and utterly compelling.--Rick Atkinson, Pulitzer Prize-winning author of An Army at Dawn Hailed upon its hardcover publication as an instant classic, the critically acclaimed New York Times bestseller 102 Minutes is now available in a revised edition timed to honor the tenth anniversary of the attacks of September 11, 2001. At 8:46 a.m. that morning, fourteen thouosand people were inside the World Trade Center just starting their workdays, but over the next 102 minutes, each would become part of a drama for the ages. Of the millions of words written about this wrenching day, most were told from the outside looking in. New York Times reporters Jim Dwyer and Kevin Flynn draw on hundreds of interviews with rescuers and survivors, thousands of pages of oral histories, and countless phone, e-mail, and emergency radio transcripts to tell the story of September 11 from the inside looking out. Dwyer and Flynn have woven an epic and unforgettable account of the struggle, determination, and grace of the ordinary men and women who made 102 minutes count as never before. 102 Minutes is a 2005 National Book Award Finalist for Nonfiction.