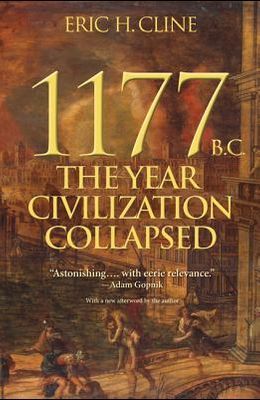 A bold reassessment of what caused the Late Bronze Age collapse In 1177 B.C., marauding groups known only as the Sea Peoples invaded Egypt. The pharaoh's army and navy managed to defeat them, but the victory so weakened Egypt that it soon slid into decline, as did most of the surrounding civilizations. After centuries of brilliance, the civilized world of the Bronze Age came to an abrupt and cataclysmic end. Kingdoms fell like dominoes over the course of just a few decades. No more Minoans or Mycenaeans. No more Trojans, Hittites, or Babylonians. The thriving economy and cultures of the late second millennium B.C., which had stretched from Greece to Egypt and Mesopotamia, suddenly ceased to exist, along with writing systems, technology, and monumental architecture. But the Sea Peoples alone could not have caused such widespread breakdown. How did it happen? In this major new account of the causes of this First Dark Ages, Eric Cline tells the gripping story of how the end was brought about by multiple interconnected failures, ranging from invasion and revolt to earthquakes, drought, and the cutting of international trade routes. Bringing to life the vibrant multicultural world of these great civilizations, he draws a sweeping panorama of the empires and globalized peoples of the Late Bronze Age and shows that it was their very interdependence that hastened their dramatic collapse and ushered in a dark age that lasted centuries. A compelling combination of narrative and the latest scholarship, 1177 B.C. sheds new light on the complex ties that gave rise to, and ultimately destroyed, the flourishing civilizations of the Late Bronze Age--and that set the stage for the emergence of classical Greece.

From the Back Cover This enthralling book describes one of the most dramatic and mysterious processes in the history of mankind--the collapse of the Bronze Age civilizations. Cline walks us through events that transpired three millennia ago, but as we follow him on this intriguing sojourn, lurking in the back of our minds are tantalizing, perpetual questions: How can prosperous cultures disappear? Can this happen again; to us?--Israel Finkelstein, coauthor of The Bible Unearthed: Archaeology's New Vision of Ancient Israel and the Origin of Its Sacred Texts Impressively marshaling the most recent archaeological and historical evidence, Eric Cline sets the record straight: there was a 'perfect storm' of migrations, rebellions, and climate change that resulted in the collapse of states that were already unstable in the Late Bronze Age. There followed an 'age of opportunity' for new kinds of political systems and ideologies that remade the world of the eastern Mediterranean in the first millennium B.C. Onward and upward with collapse!--Norman Yoffee, University of Michigan Cline has written a wonderfully researched and well-crafted overview of one of the most fascinating, complex, and debated periods in the history of the ancient world. Tying together an impressively broad range of disparate data, he weaves together a very convincing re-creation of the background, mechanisms, and results of the transition from the Late Bronze Age to the Iron Age in the eastern Mediterranean and beyond.--Aren Maeir, Bar-Ilan University 1177 B.C. tells the story of one of history's greatest mysteries. Unknown invaders shattered the splendid civilizations of the Bronze Age Mediterranean in a tidal wave of fire and slaughter, before Egypt's pharaoh turned them back in a fierce battle on the banks of the Nile. We do not know who these attackers were, and perhaps we never will; but no archaeologist is better equipped to guide us through this dramatic story than Eric Cline. 1177 B.C. is the finest account to date of one of the turning points in history.--Ian Morris, author of Why the West Rules--for Now This book is a very valuable and very timely addition to the scholarship on the end of the Late Bronze Age. Cline provides a comprehensive, interdisciplinary, and up-to-date treatment of one of the most dramatic and enigmatic periods in the history of the ancient world.--Trevor Bryce, author of The World of the Neo-Hittite Kingdoms: A Political and Military History This is an excellent, thought-provoking book that brings to life an era that is not well known to most readers.--Amanda H. Podany, author of Brotherhood of Kings: How International Relations Shaped the Ancient Near East

List of All Editions of 1177 B.C.: The Year Civilization Collapsed