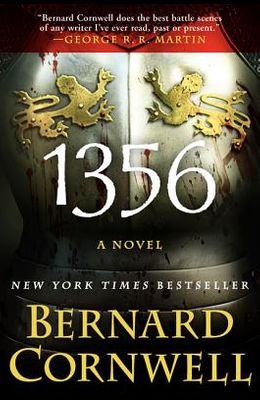 From New York Times bestselling author Bernard Cornwell, now available in paperback-- a thrilling tale of danger and conquest at the Battle of Poitiers, 1356 is a book in which Cornwell's gifts as scholar and storyteller come together spectacularly. ( Washington Post ) Bernard Cornwell, the master of martial fiction (Booklist), brings Thomas of Hookton from the popular Grail Quest series into a new adventure in 1356 , a thrilling stand-alone novel. On September 19, 1356, a heavily outnumbered English army faced off against the French in the historic Battle of Poitiers. In 1356 , Cornwell resurrects this dramatic and bloody struggle--one that would turn out to be the most decisive and improbable victory of the Hundred Years' War, a clash where the underdog English not only the captured the strategic site of Poitiers, but the French King John II as well. In the vein of Cornwell's bestselling Agincourt , 1356 is an action-packed story of danger and conquest, rich with military strategy and remarkable characters--both villainous and heroic--transporting readers to the front lines of war while painting a vivid picture of courage, treachery, and combat.

From the Back Cover The most prolific and successful historical novelist in the world today ( Wall Street Journal ) delivers another thrilling page-turner in this tale of peril and conquest at the Battle of Poitiers. September 1356, France: The English army--led by the heir to the throne, the Black Prince--is set to invade, while the French, along with their Scottish allies, are ready to hunt their enemy down. But what if there was a weapon that could decide the outcome of the war? Thomas of Hookton, known as le Batard , has orders to uncover the lost sword of Saint Peter, a blade with mystical powers said to grant certain victory to whoever possesses her. The French seek the weapon, too, and so Thomas's quest will be thwarted at every turn by battle and betrayal, by promises made and oaths broken. Rich with colorful characters, great adventure, and vivid battle scenes, 1356 tells a magnificent story of the quest for a holy relic with the power to change history--a quest that culminates in an epic and unforgettable struggle.