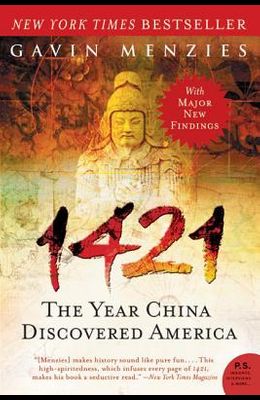 On March 8, 1421 the largest fleet the world had ever seen set sail from China. It had been sent by Emperor Zhu Di on a mission to proceed all the way to the end of the earth to collect tribute from the barbarians beyond the seas and unite the world in Confucian harmony. When the fleet returned two years later, Zhu Di had fallen from power and China was beginning a long, self-imposed isolation from the world. The records of this remarkable fleet and its discoveries were destroyed. Lost was the knowledge that Chinese ships had reached America 70 years before Columbus and circumnavigated the globe a century before Magellan. They has also discovered Antarctica, reached Australia 350 years before Cook and solved the problem of longitude 300 years before the Europeans. Gavin Menzies spent 15 years tracing the astonishing voyages of the Chinese fleet. In his New York Times best-seller 1421, he weaves together ancient maps, precise navigational knowledge, astronomy and surviving accounts by Chinese explorers and European navigators to reveal a startling story that rewrites the history of the Age of Exploration. Gavin Menzies joined the Royal Navy in 1953 and served in submarines from 1959 to 1970. Since leaving the Royal Navy, he has been to China and the Far East many times; in the course of researching 1421 he visited 120 countries, over 900 museums and libraries and every major sea port of the late Middle Ages. Menzies is married with two daughters and lives in North London. Menzies makes history sound like pure fun ... This high-spiritedness, which infuses every page of 1421, makes his book a seductive read. -- New York Times Magazine