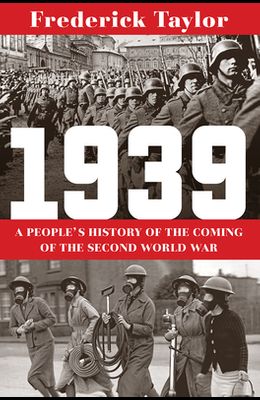 1939: A People's History of the Coming of the Second World War

In the autumn of 1938, Europe believed in the promise of peace. But only a year later, the fateful decisions of just a few men had again led Europe to a massive world war. Drawing on contemporary diaries, memoirs, and newspapers, as well as recorded interviews, 1939 is a narrative account of what the coming of the Second World War felt like to those who lived through it. Frederick Taylor, author of renowned histories of the Berlin Wall and the bombing of Dresden, highlights the day-to-day experiences of ordinary citizens as well as those who were at the height of power in Germany and Britain. Their voices lend an intimate flavor to this often-surprising account of the period and reveal a marked disconnect between government and people, for few people in either country wanted war. 1939 is a vivid and richly peopled narrative of Europe's slide into the horrors of war and a powerful warning for our own time.

From the Back Cover Praise for Frederick Taylor and his previous books: Coventry : Frederick Taylor's impressive book is easily the most authoritative study available of the devastation of Coventry 75 years ago...[A] gripping account of the background to the raid and the destruction of the city. - Sir Ian Kershaw The Downfall of Money : [Taylor] skillfully weav[es] together economic history with political narrative and draw[s] on sources from everyday life as well as the inner cabinet of diplomacy...[A] dramatic story, well told. - Adam Tooze, Wall Street Journal Exorcising Hitler : Taylor is a great storyteller...[This] is popular history at its best, essential reading for anyone who is interested in the Nazis and wants to know what happened next. - Richard J. Evans, New Statesman The Berlin Wall : [An] excellent history...[A] story with odd twists and hidden secrets, many only recently revealed, some that have been forgotten and are worth repeating. - Anne Appelbaum, Washington Post Dresden : [A] gripping, impassioned history of the cold war's most malevolent symbol. - William Grimes, New York Times

Books like 1939: A People's History of the Coming of the Second World War

List of All Editions of 1939: A People's History of the Coming of the Second World War