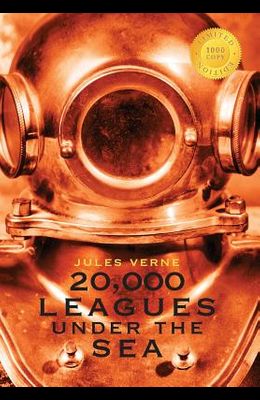 On an expedition to find a giant sea monster, three men are hurled into the ocean. They are rescued by Captain Nemo in his technologically advanced submarine. In order to keep his submarine a secret, Nemo tells the three companions that they can never leave. Their adventures take them to the submerged land of Atlantis, to the Antarctic ice shelves, and to the ocean floor in diving suits to hunt sharks with air-guns. What follows is a gripping tale of excitement as the companions try to solve Nemo's deepest secrets. In 20,000 Leagues Under the Sea, The description of Nemo's ship, called the Nautilus, was considered ahead of its time, as it accurately describes features on submarines, which at the time were very primitive vessels. In Journey to the Center of the Earth, readers were brought face to face with prehistoric creatures deep within the bowels of the Earth. In Around the World in 80 Days, Jules Verne helped make the world seem a little smaller, and accessible to young adventurers, spurring many to attempt a voyage around the world.