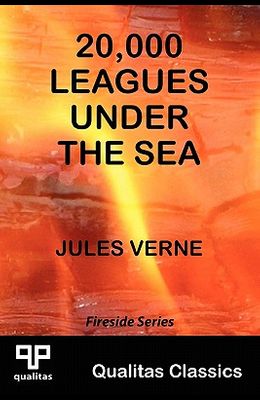 20,000 Leagues Under the Sea (Qualitas Classics)

20,000 Leagues Under the Sea is a classic science fiction novel by French writer Jules Verne published in 1869. It tells the story of Captain Nemo and his submarine, the Nautilus, as seen from the perspective of Professor Pierre Aronnax. The title refers to the distance traveled under the sea and not to a depth, as 20,000 leagues is 2.7 times the circumference of the earth. The greatest depth mentioned in the book is four leagues. Sent to investigate mysterious encounters that are disrupting international shipping, Professor Aronnax, along with his servant Conseil and disgruntled harpooner Ned Land, are captured when their frigate is sunk during an encounter with a monster. The Nautilus and its eccentric Captain Nemo afford the professor and his companions endless fascination and danger as they're swept along on a yearlong undersea voyage. This publication of 20,000 Leagues Under the Sea is part of the Qualitas Classics Fireside Series, where pure, ageless classics are presented in clean, easy to read reprints. For a complete list of titles, see: http: //www.libraryoftheclassics.co