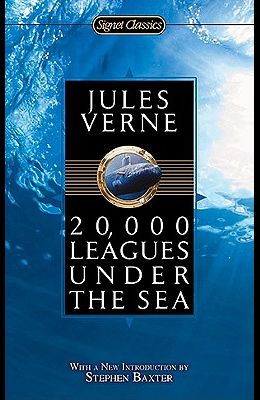 Join Captain Nemo and the Nautilus as they journey into the deep in Jules Verne's classic science fiction tale. In an age that has seen the wildest speculations of science become reality, Jules Verne is regarded as both a technological prophet and one of the most exciting masters of imagination the world has ever known. Of all his novels, none is more compelling and thrilling than 20,000 Leagues Under the Sea . This extraordinary voyage into the depths of the unknown aboard the legendary submarine Nautilus --commanded by the brilliant, tragic Captain Nemo--explores both the limitless possibilities of science and the twisted labyrinth of the human mind. The novel stands as science fiction raised to the level of literature and remains a vivid expression of a new era of technological advancement and humanity's place within that world. Translated and with a Foreword by Mendor T. Brunetti Includes an Introduction by Stephen Baxter and an Afterword by Walter James Miller

From the front Cover (back cover) News reports tell of a gigantic monster roaming the high seas at incredible speed. Professor Aronnax is brought in to investigateaand finds himself imprisoned under the sea! Who is the mysterious Captain Nemo who has sworn never to set foot on land? Will Aronnax and his friends ever escape from their amazing journey beneath the waves? This new graphic novel version brings Jules Verneas classic adventure story vividly to life.