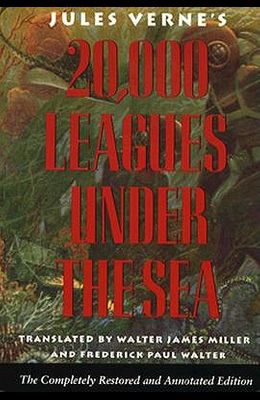 For the past 120 years, readers of English have known only a poor imitation of Jules Verne's classic French novel Vingt Mille Lieues Sous les Mers and consequently relegated the writer to the category of a boy's author. Since 1873 the standard English version has been Lewis Mercier's mangled translation, a work that's filled with errors, mistranslations, and bogus additions, and missing nearly a quarter of Verne's original text. Now, thanks to the life-long efforts of two Verne scholars, the English-speaking world at last has access to a definitive translation, the only English version based solely on the level of literary artist and scientific visionary, a category he has always enjoyed in Europe and Russia. Mercier's act of literary vandalism went unnoticed until 1965, when New York University English professor Walter Miller discovered the missing text and began the restoration of the Verne masterpiece. After nearly thirty years of work, including rigorous examinations of his translation by experts in marine technology and biology, Miller teamed that Frederick Paul Walter in 1992 to create this landmark scientific and literary achievement. Restored to the volume along with the original woodcut illustrations are the entertaining and often prescient drams of Captain Nemo, widely considered the prototypical science-fiction character. In this novel alone Verne has anticipated submarine diving planes, scuba gear, underwater laboratories, and marine ecological disasters. He also inspired large-scale underwater mining and farming of flora and fauna, and electricity from thermoclines, all currently in development. Restoration of these visionary ideas and some twenty-three percent of the original text is certain to elevate Verne's standing in American scientific and literary circles.

From the Back Cover The definitive new translation of a timeless classic, this annotated edition of '20,000 Leagues Under the Sea.' Now readers of English can appreciate what Europeans and Russians have known for more than a century. Jules Verne is a savvy storyteller meant for adult consumption. Yet his sense of wonder appeals to all ages.