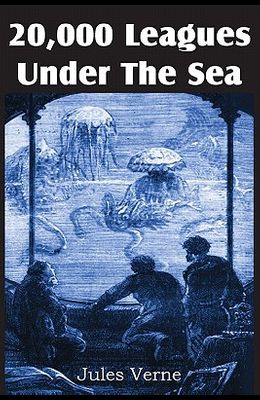 Twenty Thousand Leagues Under the Sea is a classic science fiction by Jules Verne. It tells the story of Captain Nemo and his submarine Nautilus as seen from the perspective of Professor Pierre Aronnax. As an American frigate is tracking down a ship-sinking monster the crew discovers an incredible invention, a fantastic submarine commanded by the mysterious Captain Nemo. A devastating explosion leaves three survivors who find themselves prisoners inside Nemo's ship on an underwater odyssey around the world. Twenty Thousand Leagues Under the Sea is an amazing undersea adventure and one of the earliest science fiction novels written. Generations of readers have sailed with Captain Nemo and his submarine, The Nautilus, around the world from the pearl-laden waters of Ceylon to the icy dangers of the South Pole and beyond. Jules Gabriel Verne was a French author who pioneered the science-fiction genre. He is best known for novels, Twenty Thousand Leagues Under the Sea, A Journey to the Center of the Earth, and Around the World in Eighty Days. Verne wrote about space, air, and underwater travel before air travel and practical submarines were invented, and before practical means of space travel had been devised. Verne, along with Hugo Gernsback and H. G. Wells, is often popularly referred to as the Father of Science Fiction.