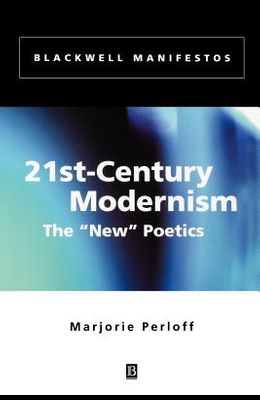 This revisionist narrative of poetic change in the twentieth century challenges the accepted notions of what poetry is and can be in the new century and makes the case for the seminal place of poetry in contemporary culture.

From the Back Cover What if, despite the current predominance of a tepid and unambitious Establishment poetry, there were a powerful avant-garde that takes up, once again, the experimentation of the early twentieth-century? Marjorie Perloff's manifesto argues that it is only at the turn of our own century that the powerful lessons of the avant-garde- an avant-garde cruelly disrupted by the Great War and subsequent political upheavals - are being learned. In detailed readings of T.S. Eliot, Gertrude Stein, Marcel Duchamp, and Velimir Khlebnikov, Perloff studies the strains which were to become so important today: the Eliotic understanding that form is meaning, Stein's revisionary treatment of syntax and everyday language, Duchamp's conceptualism, with its transformation of the ontology of the work of art itself, and Khlebnikov's poetics of etymology, sound play, and spatial design. These individual but related poetic concerns are then examined in the work of a number of poets writing today. To imagine a language, said Wittgenstein, is to imagine a form of life. This revisionist narrative studies such key poetic imaginings both at the beginning of the twentieth century and at the millennium, so as to discover how their respective forms of life both converge and cross.