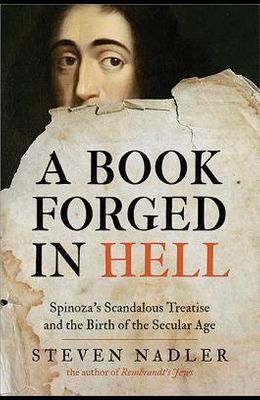 A Book Forged in Hell: Spinoza's Scandalous Treatise and the Birth of the Secular Age

The story of one of the most important--and incendiary--books in Western history When it appeared in 1670, Baruch Spinoza's Theological-Political Treatise was denounced as the most dangerous book ever published--godless, full of abominations, a book forged in hell . . . by the devil himself. Religious and secular authorities saw it as a threat to faith, social and political harmony, and everyday morality, and its author was almost universally regarded as a religious subversive and political radical who sought to spread atheism throughout Europe. Yet Spinoza's book has contributed as much as the Declaration of Independence or Thomas Paine's Common Sense to modern liberal, secular, and democratic thinking. In A Book Forged in Hell , Steven Nadler tells the fascinating story of this extraordinary book: its radical claims and their background in the philosophical, religious, and political tensions of the Dutch Golden Age, as well as the vitriolic reaction these ideas inspired. It is not hard to see why Spinoza's Treatise was so important or so controversial, or why the uproar it caused is one of the most significant events in European intellectual history. In the book, Spinoza became the first to argue that the Bible is not literally the word of God but rather a work of human literature; that true religion has nothing to do with theology, liturgical ceremonies, or sectarian dogma; and that religious authorities should have no role in governing a modern state. He also denied the reality of miracles and divine providence, reinterpreted the nature of prophecy, and made an eloquent plea for toleration and democracy. A vivid story of incendiary ideas and vicious backlash, A Book Forged in Hell will interest anyone who is curious about the origin of some of our most cherished modern beliefs. -- Reason

From the Back Cover Steven Nadler's knowledge of the many influences acting on Spinoza is profound. He is as sensitive to Spinoza's reactions to Descartes and Maimonides as to the philosopher's fears of the conservative religious forces that were threatening the Dutch Republic of his day. The wide context that Nadler provides makes for a reading of Spinoza's treatise which is unfailingly rich, nuanced, and illuminating. --Rebecca Newberger Goldstein, author of Betraying Spinoza: The Renegade Jew Who Gave Us Modernity If there is a single theme that runs throughout Spinoza's writings, Steven Nadler says, 'it is the liberation from bondage, whether psychological, political, or religious.' Spinoza's importance as a philosopher--maybe as the philosopher of modernity--hinges on that. This Amsterdam Jew was one of the grandest and boldest mold-breakers of all time. Nadler gives us a clean, crisp, indispensible account of what made Spinoza's Treatise so revolutionary. --Russell Shorto, author of Descartes' Bones A Book Forged in Hell is more than just an excellent and highly readable introduction to one of the most important texts of philosophy and political thought. Steven Nadler provides an eloquent portrait of Spinoza's treatise, placing it firmly in its historical, religious, political, and philosophical setting. --Jonathan Israel, author of A Revolution of the Mind: Radical Enlightenment and the Intellectual Origins of Modern Democracy This is an excellent book. Steven Nadler's wonderfully elegant and fluid writing style makes difficult ideas accessible and exciting without watering them down. A prime virtue of the book is that it provides just enough biographical and historical background to make the philosophy come alive and to reveal what a dramatic work Spinoza's treatise is. --Michael Della Rocca, Yale University