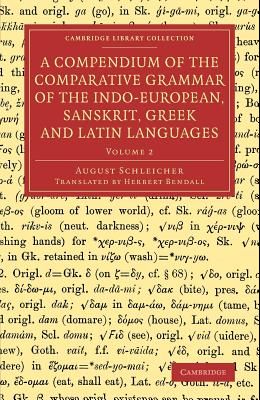 A Compendium of the Comparative Grammar of the Indo-European, Sanskrit, Greek and Latin Languages: Volume 2

by
August Schleicher and Herbert Bendall

August Schleicher (1821-68) is often credited with being the first scholar to apply a 'family tree' model to language groups. He had published extensively on individual European languages before his groundbreaking comparative Indo-European Compendium (also reissued in this series) appeared in German in 1861-2. The book was derived from his lectures, and was intended to save his students note-taking and copying from the blackboard. Each section begins with his reconstruction of a Proto-Indo-European phonological or morphological feature, and then shows how this is reflected in a range of daughter languages. This abridged English translation, based on the German third edition, appeared in 1874-7. Produced for students of Greek and Latin philology, it focuses on the phonology and morphology of 'the original Indo-European language', Sanskrit, Greek and Latin, omitting Schleicher's extensive discussion of other languages and the comparative paradigms provided in the German edition. Volume 2 covers morphology.