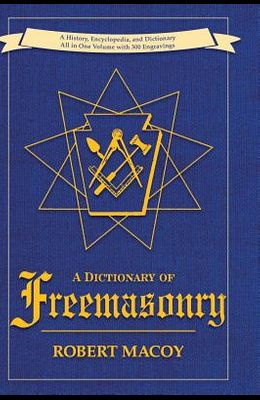 A Dictionary of Freemasonry

Discover the remarkable history of the most widely known secretive fraternal organization in A Dictionary of Freemasonry . This comprehensive and convenient one-volume text includes a thorough encyclopedia, full dictionary of symbols, and over 300 beautiful nineteenth-century engravings. The 600-year-old brotherhood of Freemasons is based on a tradition over 3,000 years old. Robert Macoy, a member of the order, uses the resources of the Fraternity available to him, to discern the truth from a myriad of half-truths, rumors, superstitions, and interpretations. He presents the rise and evolution of Freemasonry and its kindred association both ancient and modern. The General History of Freemasonry, which begins this volume, is a fascinating introduction to a very complicated subject often fraught with vagaries. The two A-to-Z reference works that follow (one an encyclopedia with listings of terms, people, places, and events that make up the extensive history of the Freemasons, and the other a dictionary of symbols) contribute to making this a very complete sourcebook on Freemasonry. From Aaron, the Abelites, and the All-Seeing Eye to the Year of Masonry, Zenith, and the Rite of Zinnendorf, this is a remarkably accessible book on a subject that runs through the course of human history. Robert Macoy (1815-1895), well known for his role in establishing the Order of the Eastern Star, earned the 33 and held many important positions with the Fraternity, such as past Deputy Grand Master and Grand Secretary of New York, as well as Grand Recorder of the Grand Commandery of New York. Founder of one of the largest Masonic publishing, regalia, and supply houses, he published extensively on Freemasonry and authored a number of books, including The Book of the Lodge and True Masonic Guide .