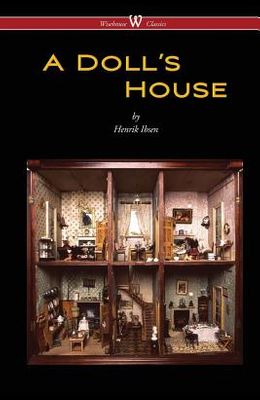 A DOLL'S HOUSE (Bokm l: Et dukkehjem; also translated as A Doll House) is a three-act play in prose by Henrik Ibsen. It premiered at the Royal Theatre in Copenhagen, Denmark, on 21 December 1879, having been published earlier that month. The play is significant for its critical attitude toward 19th-century marriage norms. It aroused great controversy at the time, as it concludes with the protagonist, Nora, leaving her husband and children because she wants to discover herself. Ibsen was inspired by the belief that a woman cannot be herself in modern society, since it is an exclusively male society, with laws made by men and with prosecutors and judges who assess feminine conduct from a masculine standpoint. Its ideas can also be seen as having a wider application: Michael Meyer argued that the play's theme is not women's rights, but rather the need of every individual to find out the kind of person he or she really is and to strive to become that person. In a speech given to the Norwegian Association for Women's Rights in 1898, Ibsen insisted that he must disclaim the honor of having consciously worked for the women's rights movement, since he wrote without any conscious thought of making propaganda, his task having been 2the description of humanity. In 2006, the centennial of Ibsen's death, A DOLL'S HOUSE held the distinction of being the world's most performed play for that year. UNESCO has inscribed Ibsen's autographed manuscripts of A DOLL'S HOUSE on the Memory of the World Register in 2001, in recognition of their historical value. (more on www.wisehouse-classics.com)