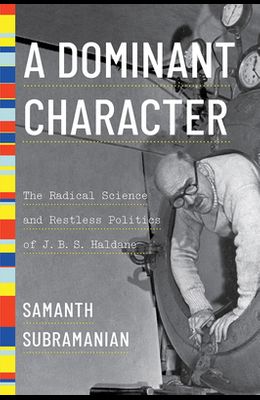 A Dominant Character: The Radical Science and Restless Politics of J. B. S. Haldane

J. B. S. Haldane's life was rich and strange, never short on genius or drama--from his boyhood apprenticeship to his scientist father, who first instilled in him a devotion to the scientific method; to his time in the trenches during the First World War, where he wrote his first scientific paper; to his numerous experiments on himself, including inhaling dangerous levels of carbon dioxide and drinking hydrochloric acid; to his clandestine research for the British Admiralty during the Second World War. He is best remembered as a geneticist who revolutionized our understanding of evolution, but his peers hailed him as a polymath. One student called him the last man who might know all there was to be known. He foresaw in vitro fertilization, peak oil, and the hydrogen fuel cell, and his contributions ranged over physiology, genetics, evolutionary biology, mathematics, and biostatistics. He was also a staunch Communist, which led him to Spain during the Civil War and sparked suspicions that he was spying for the Soviets. He wrote copiously on science and politics in newspapers and magazines, and he gave speeches in town halls and on the radio--all of which made him, in his day, as famous in Britain as Einstein. It is the duty of scientists to think politically, Haldane believed, and he sought not simply to tell his readers what to think but to show them how to think. Beautifully written and richly detailed, Samanth Subramanian's A Dominant Character recounts Haldane's boisterous life and examines the questions he raised about the intersections of genetics and politics--questions that resonate even more urgently today.