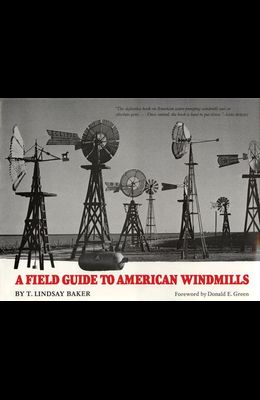 A Field Guide to American Windmills

Before the development of the first self-governing windmill, settlement of the upland areas of the American West was almost impossible. Windmills were needed to pump underground water to the surface. As soon as their design and manufacture had been perfected, the mills became the most prominent feature of the American landscape, not only in the western two-thirds of the nation but also in the East and particularly in the Middle East. Besides supplying the needs of farmers and ranchers, windmills performed such tasks as pumping water to the roofs of New York tenements, cleaning our mine shafts and ships' bilges, and providing water for the boilers of locomotives. This guide to America's windmills is both a complete general history of turbine-wheel mills and an identification guide to the 112 most common models, which still dot the landscape today. With this guide a traveler or enthusiast crossing the plains and prairies of North American can identify virtually every farm-style windmill that he or she can see with a good pair of binoculars. The guide also serves as a handbook for the restoration of antique mills. In his lively narrative T. Lindsay Baker clearly explains the technical evolution of the mills and shares a wealth of windmill folklore. Among the 376 illustrations are unpublished historical photographs, long-lost engravings, field photographs by the author, and detailed India-ink drawings of the 112 most popular designs. Appendices identify all the known windmill manufacturers in the United States, Canada, and Mexico and all the known windmill models from the 1850s to the present day. The comprehensive bibliography is the first published list of source materials on the history of wind-power utilization.