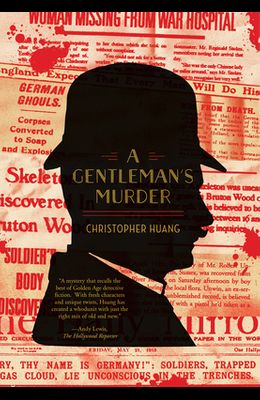 Now in development for television with Endeavor Content An auspicious debut mystery. -- Booklist Recalls the best of Golden Age detective fiction. --Andy Lewis, The Hollywood Reporter Dorothy Sayers is alive and well and writing under the name of Christopher Huang. --Rhys Bowen, New York Times -bestselling author of The Tuscan Child A must read for fans of Anthony Horowitz, Charles Todd, and Anne Perry. --Daryl Maxwell, Los Angeles Public Library Will please fans of both Agatha Christie and Gillian Flynn. --Sarah Nivala, Book Soup The year is 1924. The cobblestoned streets of St. James ring with jazz as Britain races forward into an age of peace and prosperity. London's back alleys, however, are filled with broken soldiers and still enshadowed by the lingering horrors of the Great War. Only a few years removed from the trenches of Flanders himself, Lieutenant Eric Peterkin has just been granted membership in the most prestigious soldiers-only club in London: The Britannia. But when a gentleman's wager ends with a member stabbed to death, the victim's last words echo in the Lieutenant's head: that he would soon right a great wrong from the past. Eric is certain that one of his fellow members is the murderer: but who? Captain Mortimer Wolfe, the soldier's soldier thrice escaped from German custody? Second Lieutenant Oliver Saxon, the brilliant codebreaker? Or Captain Edward Aldershott, the steely club president whose Savile Row suits hide a frightening collision of mustard gas scars? Eric's investigation will draw him far from the marbled halls of the Britannia, to the shadowy remains of a dilapidated war hospital and the heroin dens of Limehouse. And as the facade of gentlemenhood cracks, Eric faces a Matryoshka doll of murder, vice, and secrets pointing not only to the officers of his own club but the very investigator assigned by Scotland Yard.