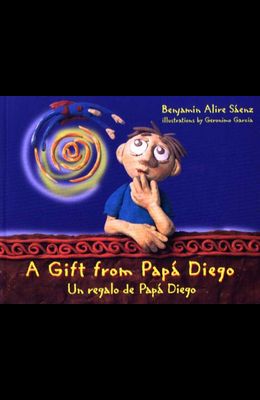 Sensitively told and true to the experience of many Mexican Americans, this bilingual picture book bridges the borders that separate all families who must live far apart from their loved ones.-- Booklist ...accompanied by innovative illustrations, originally modeled with clay. Reminiscent of Mexican folk art, they fit the story especially well, conveying its warmth and poignancy.-- Kirkus Reviews A tender love story of a book...a kiss on the forehead at bedtime --Naomi Shihab Nye A stylist in both poetry and prose, S enz has now taken his magic of flight to younger readers. This is his gift to them. Parents, snuggle up to your children at night and read this delightful tale of Dieguito.--Gary Soto La traducc on al espa ol es buena y el dise o del libro es atractivo.-- People en Espa ol The tender story in A Gift From Pap Diego / Un regalo de Pap Diego by Benjamin Alire Saenz is sprinkled with Spanish expressions throughout the English version, adding to the flavor of this bilingual tale. A glossary of the terms used is provided at the end of the book. In addition, a complete Spanish text is printed on each half page. Illustrations of wonderful clay figures painted with bright colors highlight the narrative and provide an attractive graphic border. This paperback original is a debut into the world of children's books for Mr. Saenz, and he has succeeded in writing a poignant read-aloud book for young children - at once entertaining and comforting.-- Barbara Bonds Thomas Benjamin Alire S enz was born in his grandmother's house in Picacho, New Mexico--a farming village 40 miles north of the border between Mexico and the United States. Ben's parents spoke mostly Spanish at home and his grandparents spoke only Spanish, so Ben learned much of his English from his brothers and sisters, his friends, and by watching cartoons on television. When he was a little boy, he was a passionate reader of comic books--Superman, Spiderman, Batman, and all the rest of the Super Heros. Ben thought it was cool that Superman could fly. Growing up, Ben discovered that he liked to write. He liked to draw and paint, too.