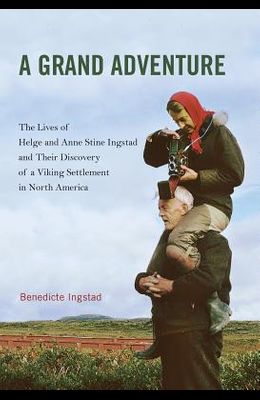 A Grand Adventure: The Lives of Helge and Anne Stine Ingstad and Their Discovery of a Viking Settlement in North America

In 1960, Helge Ingstad and Anne Stine Ingstad made a discovery that rewrote the history of European exploration and colonization of North America - a thousand-year-old Viking settlement at L'Anse aux Meadows, Newfoundland. In A Grand Adventure, the Ingstads' daughter Benedicte tells the story of their remarkable lives spent working together, sharing poignant details from her parent's private letters, personal diaries, their dinner table conversations, and Benedicte's own participation in her parents' excavations. Following young Helge Ingstad from his 1926 decision to abandon a successful law practice for North American expeditions through Canada's Barren Lands, Alaska's Anaktuvuk Pass, and the mountains of northern Mexico, the story recounts his governorship of Norwegian territories and marriage to Anne Stine Moe. The author then traces Helge and Anne Stine's travels around the world, focusing in particular on their discovery of the Viking settlement at the northern tip of Newfoundland. With Anne Stine as the head archaeologist, they excavate these ruins for eight years, while weathering destructive skepticism from academic peers, until indisputable evidence is unearthed and their find is confirmed. A remarkable look at a personal and professional relationship, A Grand Adventure shows two explorers' unrelenting drive and unfailing courage.