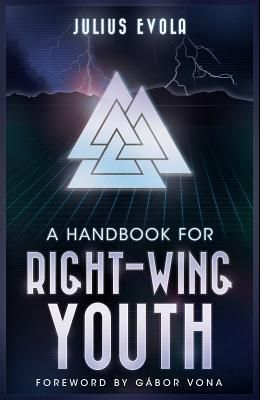 A Handbook for Right-Wing Youth

A Handbook for Right-Wing Youth consists of essays selected from throughout Evola's lifetime, but most especially from the post-war era, when youth across the Western world had thrown their societies into chaos with protests, civil unrest, and by defying conventional mores. According to Evola, the problem was not with the youth themselves, given that he viewed the inquisitive and seeking mentality associated with the young as essential toward opening oneself to the wisdom of Tradition, but rather with the fact that post-war Western civilisation itself had come to venerate youthfulness over maturity, thus leaving the young without any guidance or authority. Evola believed that it was only by channelling the energies of the rebellious youth into the political Right -- not the Right of today, but rather that Right which represents the timeless principles which stem from before the advent of liberalism -- thus restoring the West to a healthy and organic condition once again. In these essays, he defines those principles which must be undertaken by youth -- not just by those young in age, but those young in spirit as well -- if they are to gain mastery not only over their societies, but also over themselves. As such, while this is a book aimed at the young, it is not exclusively for them. This book was assembled out of Evola's writings by the Hungarian traditionalists, and includes a Foreword by GAbor Vona, Chairman of Hungary's political party, Jobbik.

Books similiar to A Handbook for Right-Wing Youth

List of All Editions of A Handbook for Right-Wing Youth