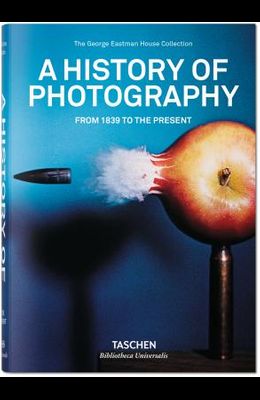 A History of Photography. from 1839 to the Present

In the beginning there was light Photography throughout the ages George Eastman 's career developed in a particularly American way. The founder of Kodak progressed from a delivery boy to one of the most important industrialists in American history, and a crucial innovator in photographic history. Eastman died in 1932, and left his house to the University of Rochester. Since 1949 the site has operated as an international museum of photography and film , and today holds the largest collection of its kind in the world, containing over 400,000 images and negatives - among them the work of such masters as Alfred Stieglitz, Edward Steichen, and Ansel Adams. Home also to 23,000 cinema films, five million film stills, one of the most important silent film collections, technical equipment and a library with 40,000 books on photography and film, the George Eastman House is a pilgrimage site for researchers, photographers and collectors from all over the world. This volume curates the most impressive images from the collection in chronological order to offer an incomparable overview of photographic history . About the series: Bibliotheca Universalis -- Compact cultural companions celebrating the eclectic TASCHEN universe at an unbeatable, democratic price Since we started our work as cultural archaeologists in 1980, the name TASCHEN has become synonymous with accessible, open-minded publishing. Bibliotheca Universalis brings together nearly 100 of our all-time favorite titles in a neat new format so you can curate your own affordable library of art, anthropology, and aphrodisia. Bookworm's delight -- never bore, always excite