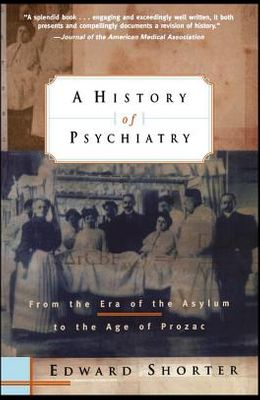 A History of Psychiatry: From the Era of the Asylum to the Age of Prozac

Edward Shorter reveals the harsh, farcical, and inspiring realities of society's changing attitudes toward and attempts to deal with its mentally ill, and the efforts of generations of scientists and physicians to ease their suffering.

From the Back Cover PPPP . . . To compress 200 years of psychiatric theory and practice into a compelling and coherent narrative is a fine achievement . . . . What strikes the reader [most] are Shorter's storytelling skills, his ability to conjure up the personalities of the psychiatrists who shaped the discipline and the conditions under which they and their patients lived.--Ray Monk The Mail on Sunday magazine, U.K. An opinionated, anecdote-rich history. . . . While psychiatrists may quibble, and Freudians and other psychoanalysts will surely squawk, those without a vested interest will be thoroughly entertained and certainly enlightened.--Kirkus Reviews. Shorter tells his story with immense panache, narrative clarity, and genuinely deep erudition.--Roy Porter Wellcome Institute for the History of Medicine. In A History of Psychiatry, Edward Shorter shows us the harsh, farcical, and inspiring realities of society's changing attitudes toward and attempts to deal with its mentally ill and the efforts of generations of scientists and physicians to ease their suffering. He paints vivid portraits of psychiatry's leading historical figures and pulls no punches in assessing their roles in advancing or sidetracking our understanding of the origins of mental illness. Shorter also identifies the scientific and cultural factors that shaped the development of psychiatry. He reveals the forces behind the unparalleled sophistication of psychiatry in Germany during the eighteenth and nineteenth centuries as well as the emergence of the United States as the world capital of psychoanalysis. This engagingly written, thoroughly researched, and fiercely partisan account is compelling reading for anyone with a personal, intellectual, or professional interest in psychiatry.