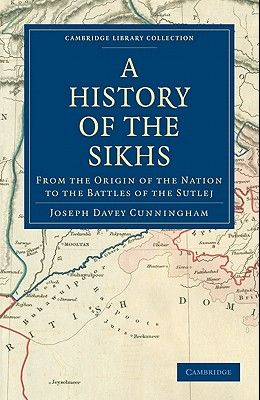 A History of the Sikhs: From the Origin of the Nation to the Battles of the Sutlej

Joseph Davey Cunningham (1812-1851) joined the East India Company's army thanks to the patronage of Sir Walter Scott. He became the assistant to Colonel Claud Wade, a political agent on the Sikh frontier, in 1837, and spent eight years in various political roles living among the Sikh in the Punjab. While writing a report in 1844 for the government, he decided to undertake the history of the Sikhs, and received encouragement for the project from his father, Scottish poet and author Allan Cunningham. He spent four years on the book, and while it established his reputation as a historian of India, it also destroyed his career as a colonial official: he fell foul of the Army in India for his revelation of supposedly secret negotiations with Sikh leaders, and allegations of corruption, during the First Anglo-Sikh War of 1845-1846.