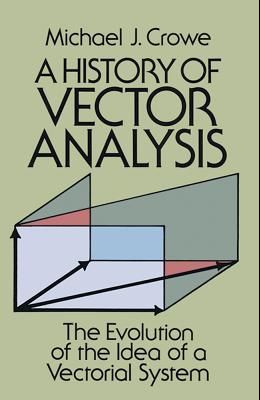 A History of Vector Analysis: The Evolution of the Idea of a Vectorial System

by
Michael J Crowe and Mathematics

On October 16, 1843, Sir William Rowan Hamilton discovered quaternions and, on the very same day, presented his breakthrough to the Royal Irish Academy. Meanwhile, in a less dramatic style, a German high school teacher, Hermann Grassmann, was developing another vectorial system involving hypercomplex numbers comparable to quaternions. The creations of these two mathematicians led to other vectorial systems, most notably the system of vector analysis formulated by Josiah Willard Gibbs and Oliver Heaviside and now almost universally employed in mathematics, physics and engineering. Yet the Gibbs-Heaviside system won acceptance only after decades of debate and controversy in the latter half of the nineteenth century concerning which of the competing systems offered the greatest advantages for mathematical pedagogy and practice. This volume, the first large-scale study of the development of vectorial systems, traces he rise of the vector concept from the discovery of complex numbers through the systems of hypercomplex numbers created by Hamilton and Grassmann to the final acceptance around 1910 of the modern system of vector analysis. Professor Michael J. Crowe (University of Notre Dame) discusses each major vectorial system as well as the motivations that led to their creation, development, and acceptance or rejection. The vectorial approach revolutionized mathematical methods and teaching in algebra, geometry, and physical science. As Professor Crowe explains, in these areas traditional Cartesian methods were replaced by vectorial approaches. He also presents the history of ideas of vector addition, subtraction, multiplication, division (in those systems where it occurs) and differentiation. His book also contains refreshing portraits of the personalities involved in the competition among the various systems. Teachers, students, and practitioners of mathematics, physics, and engineering as well as anyone interested in the history of scientific ideas will find this volume to be well written, solidly argued, and excellently documented. Reviewers have described it a s a fascinating volume, an engaging and penetrating historical study and an outstanding book (that) will doubtless long remain the standard work on the subject. In 1992 it won an award for excellence from the Jean Scott Foundation of France.