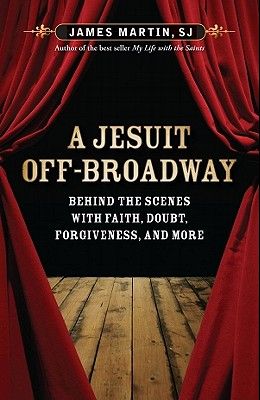 A Jesuit Off-Broadway: Behind the Scenes with Faith, Doubt, Forgiveness, and More

Many of us have questions about the Bible: Can we believe the Bible? What was Jesus' mission? What is sin? Does hell exist? Is anyone beyond God's forgiveness? In A Jesuit Off-Brodway , James Martin, SJ, answers these questions about the Bible, and other big questions about life, as he serves as a theological advisor to the cast of The Last Days of Judas Iscariot . Grab a front-row seat to Fr. Martin's six months with the LAByrinth Theater Company and see first-hand what it's like to share the faith with a largely secular group of people . . . and discover, along with Martin, that the sacred and the secular aren't always that far apart.

From the Back Cover What happens when theater and theology share the stage? Discover the answer in this thought-provoking memoir by Christopher Award-winning author and Jesuit priest James Martin. Take a front-row seat to Father Martin's six-month experience as a theological consultant for the New York theater production of The Last Days of Judas Iscariot , directed by Oscar-winning actor Philip Seymour Hoffman, and starring Sam Rockwell and Eric Bogosian. While Martin thoughtfully responds to the deeply spiritual and soul-searching questions posed to him by the creative team and actors--questions that many of us ponder at one time or another in our lives--he learns about the world of professional theater and all that is required to put on a successful play. Join Father Martin as he takes this fascinating foray into the acting arena . . . and offers answers to some of life's biggest questions.
From the front Cover A Jesuit priest, a New York play, and questions as profound as they come . . . A few years after being called to the priesthood, Father James Martin was startled to get a very different kind of call one evening in 2004: a phone call from actor Sam Rockwell. Rockwell had been cast for the part of Judas Iscariot in an Off-Broadway play, The Last Days of Judas Iscariot , where Judas was on trial for his crime of betraying Jesus. Would Martin be willing to serve as a theological consultant for the play? Martin gladly obliged, and within weeks playwright Stephen Adly Guirgis, director Philip Seymour Hoffman, and members of the cast began to dialogue with Martin about a host of spiritual issues that the play evoked: Can we believe the Bible? What was Jesus' mission? What is sin? Does hell exist? Is anyone beyond God's forgiveness? A Jesuit Off-Broadway recounts Martin's six months with the LAByrinth Theater Company and his education in the making of a play, from the writing of the script to the cast party on closing night. At the same time, the occasionally profane and routinely free-spirited creative team and actors learned from Martin key insights into Christian faith and theology, while often revealing a profoundly spiritual side to their lives. By the time the final curtain fell, Martin and the cast had gleaned important and at times surprising lessons from each other as they realized how the sacred and the secular aren't always that far apart . . . and how, in the end, questions tell us more than answers ever do.