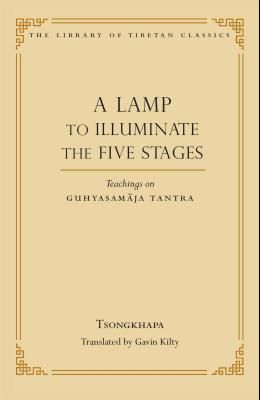 A Lamp to Illuminate the Five Stages: Teachings on Guhyasamaja Tantra

Part of the Treasury of the Buddhist Sciences: Associated Literature Series
by
Je Tsongkhapa and Kilty Galvin and Thupten Jinpa

Tsongkhapa's A Lamp to Illuminate the Five Stages (1419) is a comprehensive presentation of the highest yoga class of Buddhist tantra, especially the key practices - the so-called five stages ( pancakrama ) - of the advanced phase of Guhyasamaja tantra. Beginning with a thorough examination of the Indian sources, Tsongkhapa draws particularly from the writings of Nagarjuna, Aryadeva, Candrakirti, and Naropa to develop a definitive understanding of the Vajrayana completion stage. Whereas in the generation stage, meditators visualize the Buddha in the form of the deity residing in a mandala palace, in the completion stage discussed in the present volume, meditators transcend ordinary consciousness and actualize the state of a buddha themselves. Among other things, Tsongkhapa's work covers the subtle human physiology of channels and winds along with the process of dying, the bardo, and rebirth. This definitive statement on Guhyasamaja tantra profoundly affected the course of Buddhist practice in Tibet.

Treasury of the Buddhist Sciences: Associated Literature Series In Order - By Je Tsongkhapa