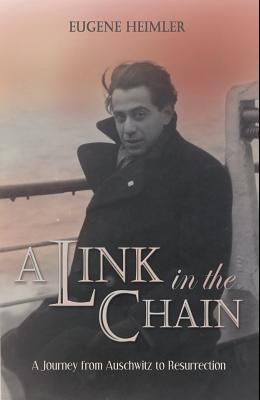 A Link in the Chain

In Night of the Mist, Eugene Heimler gave a moving and gripping account of his experiences as a prisoner in Auschwitz and other Nazi concentration camps. In this book, A Link in the Chain, he describes his eventful return journey from Auschwitz to his home in Hungary and how he reshaped his life since the end of the war. Heimler tells his stories poetically and vividly: He travels towards home on a buffer of a train, next to a German SS man who could easily push him off; He witnesses the rape of Kati, his travel companion by Russian brutes, with their machine guns aimed at him; Returning to Hungary, at the age of 23, he soon realizes that as a Jew he is still not wanted in his native country. The Red Army occupies Hungary and makes attempts on his life; He works as a journalist in the Social Democratic Headquarters and is arrested and charged with treason for an article he wrote; shots are aimed at him. When the Right Wing Smallholders win the Hungarian election in 1945, he contemplates leaving Hungary. An invitation to spy for the Communists in return for getting his poems published gets him into a momentary trap, but he outwits Uncle Zoltan, his conspirator who unwittingly provides him with the Russian exit visa he still needs in order to go to London 'for a short visit'. In 1947 he travels to England. His newly married wife, Lily, follows him later. When in 1949 the Secret Police tortures his friends in Budapest, Heimler breaks down, as now all hope is lost for ever returning to his native homeland. His trials in England are manifold. Without speaking English, the couple lives on fear and tears. When Heimler arrived in England he was, mentally, still a very sick man. He describes the psychoanalytic treatment which he underwent at that time. After years of hardship and struggle he qualifies as a psychiatric social worker in 1953. He becomes County Psychiatric Social Work Organizer for the Middlesex County Council, and his experimental work made him one of the pioneers of 'community mental health' in England. His interviews with patients in pubs and parks have been the subject of much controversy. Heimler goes on to show not only how he affects his patients but also how they affect him, and how he grows through and with them. His account, in the latter part of the book, of the 'Hendon Experiment', in which he works hand in hand with the National Assistance Board in an attempt to solve the problem of the 'work-shy', and of his experiment in mental health with a General Practitioner, will be of particular interest to doctors, social workers and all who are concerned with the care of the mentally ill.