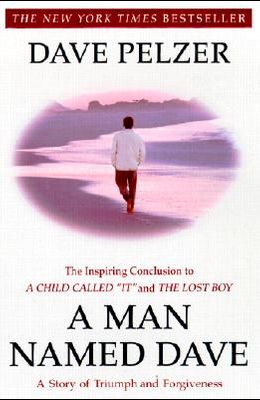 A Man Named Dave: A Story of Triumph and Forgiveness

A Man Named Dave is the long-awaited conclusion to Pelzer's trilogy in which he describes how he triumphed over years of physical and emotional abuse from his parents to become a self-accepting and confident adult. Readers of this bestselling autobiography will discover how Pelzer finally confronts his pathologically abusive mother and his neglectful, alcoholic father in an effort to turn a childhood marked by rejection into an adulthood filled with love and acceptance.

From the Back Cover All those years you tried your best to break me, and I'm still here. One day you'll see, I'm going to make something of myself. These words were Dave Pelzer's declaration of independence to his mother, and they represented the ultimate act of self-reliance. Dave's father never intervened as his mother abused him with shocking brutality. The more than two million readers of Pelzer's previous international bestsellers, A Child Called It and The Lost Boy, know that he lived to tell his courageous story. But even after he was rescued, his life remained haunted by memories of his years as the bruised, cowering It locked in his mother's basement. Desperately trying to make something of his life, Dave was determined to weather every setback and gain strength from adversity. With stunning generosity of spirit, Dave Pelzer invites readers on his journey to discover how a lost, nameless boy finally found himself in the heart and soul of a man who is free at last.