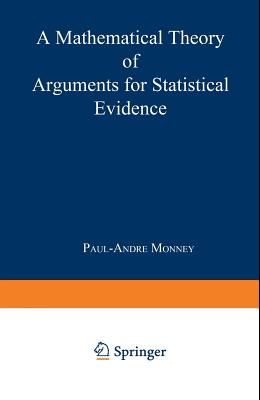 A Mathematical Theory of Arguments for Statistical Evidence

The subject of this book is the reasoning under uncertainty based on sta- tistical evidence, where the word reasoning is taken to mean searching for arguments in favor or against particular hypotheses of interest. The kind of reasoning we are using is composed of two aspects. The first one is inspired from classical reasoning in formal logic, where deductions are made from a knowledge base of observed facts and formulas representing the domain spe- cific knowledge. In this book, the facts are the statistical observations and the general knowledge is represented by an instance of a special kind of sta- tistical models called functional models. The second aspect deals with the uncertainty under which the formal reasoning takes place. For this aspect, the theory of hints 27] is the appropriate tool. Basically, we assume that some uncertain perturbation takes a specific value and then logically eval- uate the consequences of this assumption. The original uncertainty about the perturbation is then transferred to the consequences of the assumption. This kind of reasoning is called assumption-based reasoning. Before going into more details about the content of this book, it might be interesting to look briefly at the roots and origins of assumption-based reasoning in the statistical context. In 1930, R. A. Fisher 17] defined the notion of fiducial distribution as the result of a new form of argument, as opposed to the result of the older Bayesian argument.