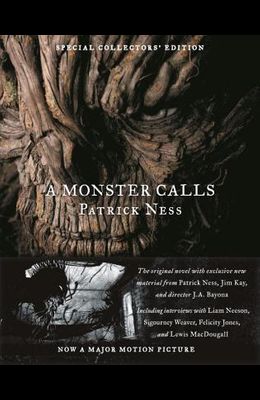 by
Patrick Ness and Jim Kay

A deluxe hardcover edition of Patrick Ness's masterpiece features the entire illustrated novel as well as more than one hundred pages of extraordinary film-inspired content. To celebrate the release of Patrick Ness's acclaimed novel as a feature film, directed by Juan Antonio Bayona, this gorgeous special edition of A Monster Calls includes Jim Kay's original illustrations as well as a comprehensive bonus section featuring: * enlightening new essays by the author (who also wrote the screenplay) * interviews with the director, cast, and crew * stills from the movie * exclusive behind-the-scenes content * previously unpublished early sketches by the illustrator, whose artwork inspires animated scenes in the film.