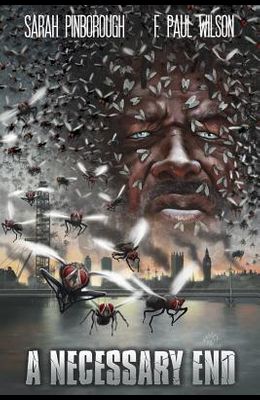 LIFE CAME OUT OF AFRICA... But now it's death's turn... It spreads like a plague but it's not a disease. Medical science is helpless against the deadly autoimmune reaction caused by the bite of the swarming African flies. Billions are dead, more are dying. Across the world, governments are falling, civilization is crumbling, and everywhere those still alive fear the death carried in the skies. Some say the flies are a freak mutation, others say they're man made, but as hope of beating them fades, most turn to the only comfort left and see the plague as God's will. He sent a deadly deluge the last time He was upset with mankind. This time He has darkened the sky with deadly flies. And perhaps that is true, for so many of the afflicted speak with their dying breaths of seeing God coming for them. But not everyone dies. A very few seem immune. They call themselves mungus and preach acceptance of the plague, encouraging people to allow themselves to be bitten by the flies of the Lord so that they may join Him in the afterlife. Nigel, an investigative reporter, searches the apocalyptic landscape of plague-ravaged England in search of Bandora, a kidnapped African boy. On a quest for personal redemption as well as the truth, his search takes him away from the troubles he can no longer face at home, and into the world of the head mungu, a man who speaks truth in riddles and has no fear of the African flies. A Necessary End is about apocalypse, about love, about the fragile bonds that hold marriages and civilizations together. But mostly it's about truth - how we find it, how we embrace or reject it, and how we must face the truths within ourselves.