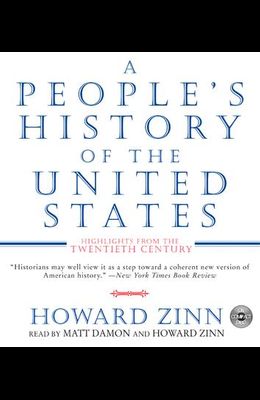 A People's History of the United States CD: Highlights from the 20th Century

by
Howard Zinn and Matt Damon

Timed to release with the Perennial Classics publication, Zinn's revolutionary account of American history is updated with two new chapters read by Academy Award( winner Matt Damon, with a Preface and Afterword read by Zinn. 6 CDs.

From the Back Cover Known for its lively, clear prose as well as its scholarly research, A People's History isthe only volume to tell America's story from the point of view of--and in the wordsof--America's women, African-Americans, Native Americans, working poor, andimmigrant laborers. Here we learn that many of our country's greatest battles--childlaborlaws, women's rights, racial equality--were carried out at the grass roots level, against bloody resistance. Revised and updated with new chapters on Clinton's presidency, the 2000 Election, and the War on Terrorism, A People's History of the United States featuresinsightful analysis of the most important events in our history.