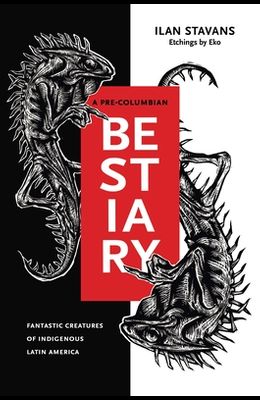 An encyclopedic collaboration between award-winning Mexican American scholar Ilan Stavans and illustrator Eko, A Pre-Columbian Bestiary features lively and informative descriptions of forty-six religious, mythical, and imaginary creatures from the Nahua, Aztec, Maya, Tabasco, Inca, Aymara, and other cultures of Latin America. From the siren-like Acuecu yotl and the water animal Chaac to the class-conscious Oc and the god of light and darkness, X lotl, the magnificent entities in this volume belong to the same family of real and invented creatures imagined by Dante, Franz Kafka, C. S. Lewis, Jorge Luis Borges, Umberto Eco, and J. K. Rowling. They are mined from indigenous religious texts, like the Popol Vuh, and from chronicles, both real and fictional, of the Spanish conquest by Diego Dur n, Bernal D az del Castillo, and Fernando de Zarzamora, among others. In this playful compilation, Stavans distills imagery from the work of magic realist masters such as Juan Rulfo and Gabriel Garc a M rquez; from songs of protest in Mexico, Guatemala, and Peru; and from aboriginal beasts in Jewish, Muslim, European, British, and other traditions. In the spirit of imaginative invention, even the bibliography is a mixture of authentic and inventive material. An inspiring record of resistance and memory from a civilization whose superb pantheon of myths never ceases to amaze, A Pre-Columbian Bestiary will delight anyone interested in the history and culture of Latin America.

List of All Editions of A Pre-Columbian Bestiary: Fantastic Creatures of Indigenous Latin America