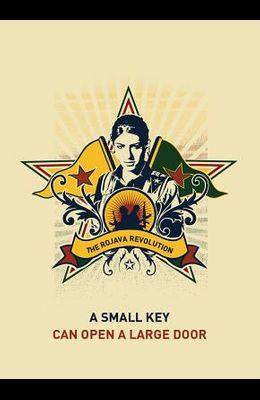 A Small Key Can Open a Large Door: The Rojava Revolution

by
Strangers in a Tangl Wilderness

There's a revolution going on in northern Syria, one that challenges everything we know about government and society and freedom. With centuries of ethnic oppression behind them, their backs against the embargo wall of Turkey, and the ruthless forces of the Islamic State laying siege to their cities, the people of Rojava are trying what might be the most ambitious social experiment of our times. Two-and-a-half million people are trying to live without a nationstate, using direct democracy to build a society ruled from the bottom up. As the Syrian civil war rages, the Kurds and other ethnic groups of Rojava fight for autonomy, feminism, ecological stewardship, cooperative economics, and ethnic, linguistic, and religious pluralism. It behooves us to understand their struggle as best we can. This book, compiling the words of militia members and academics alike, lays out the Rojava Revolution in plain language.

From the Back Cover The world watched in horror last autumn as the ruthless Islamic State (commonly referred to as ISIS) marched on the small city of Kobane in northern Syria. No one expected the city to survive the attack. But it did. Mixed-gender militias with small arms held one of the most feared armies in the world at bay. The smoke cleared, and Kobane still stood. And western media attention moved on. The YPG and the YPJ, the militias who held the city, were fighting for their lives and their land. But even more than that, they were fighting to defend their their revolution: the Rojava Revolution. When the Assad regime began to fall, Kurds and other ethnic minorities in northern Syria carved out pockets of liberty and started one of the greatest social experiments the world has ever seen. Based on their own history of struggle and on the writings of social ecologist Murray Bookchin, the people of Rojava have developed an anti-state and anti-capitalist way of life. It's a way of life that values feminism, direct democracy, ecological stewardship, and ethnic, linguistic, and religious pluralism. And right now, 2.5 million people are trying their hardest to defend their revolution against ISIS attacks from the south and an international trade embargo ruthlessly enforced by Turkey to the north. Between language barriers, cultural barriers, and an international trade embargo, it can be hard to understand what is happening there. It can be hard to understand how to support the people of Rojava in their revolution. But in this short book, scholars and militia fighters alike explore and explain the situation in plain language. They discuss the Rojava principles that bind the region together and they discuss what it means to be in solidarity with those fighting in Rojava. But even beyond that, they discuss what we can learn from the brave women and men of Rojava.