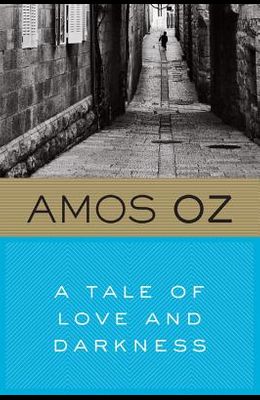 A Tale of Love and Darkness

Tragic, comic, and utterly honest, this family saga tells the the story of a boy growing up in the war-torn Jerusalem of the 1940s and '50s. It is also a magical self-portrait of a writer who witnessed the birth of a nation and lived through its turbulent history.

From the Back Cover Touching, haunting, wrenching, amusing, and sometimes downright hilarious . . . This book is both richly panoramic and intensely personal . . . one of the most enchanting and deeply satisfying books that I have read in many years.--Robert Alter, The New Republic Tragic, comic, and utterly honest, A Tale of Love and Darkness is at once a family saga and a magical self-portrait of a writer who witnessed the birth of a nation and lived through its turbulent history. It is the story of a boy growing up in the war-torn Jerusalem of the forties and fifties, in a small apartment crowded with books in twelve languages and relatives speaking nearly as many. The story of an adolescent whose life has been changed forever by his mother's suicide when he was twelve years old. The story of a man who leaves the constraints of his family and its community of dreamers, scholars, and failed businessmen to join a kibbutz, change his name, marry, have children. The story of a writer who becomes an active participant in the political life of his nation. It is impossible to give a full account of this book's riches.-- The Washington Post Book World A[n] . . . ingenious work that circles around the rise of a state, the tragic destiny of a mother, a boy's creation of a new self.-- The New Yorker Detailed and beautiful . . . As he writes about himself and his family, Oz is also writing part of the history of the Jews.-- Los Angeles Times Amos Oz is the author of numerous works of fiction and essay collections. He has received the Koret Jewish Book Award, the Prix Femina, the Israel Prize, and the Frankfurt Peace Prize, and his books have been translated into more than thirty languages. Amos Oz lives in Israel. Translated from the Hebrew by Nicholas de Lange