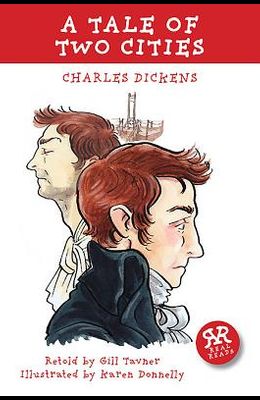 A Tale of Two Cities

'It is a far, far better thing that I do than I have ever done.' Sydney Carton is a lawyer who has wasted his abilities and his life. Now he has to make a difficult choice about what is really important to him, which could be a matter of life or death. The French Revolution is running its violent course; lives are ruined as a new France is created. How did the gentle Doctor Manette and his daughter Lucie become caught up in France's struggles? What is the real identity of the handsome Charles Darnay, who wins Lucie's hand in marriage? And why does the shadow of La Bastille Prison hang over them all? The best of times and the worst of times. London and Paris. Sydney Carton and Charles Darnay. A story of contrasts and chaos. Can peace ever be restored in France? Can it ever be restored in the hearts of the people involved? Real Reads are accessible texts designed to support the literacy development of primary and lower secondary age children while introducing them to the riches of our international literary heritage. Each book is a retelling of a work of great literature from one of the world's greatest cultures, fitted into a 64-page book, making classic stories, dramas and histories available to intelligent young readers as a bridge to the full texts, to language students wanting access to other cultures, and to adult readers who are unlikely ever to read the original versions.