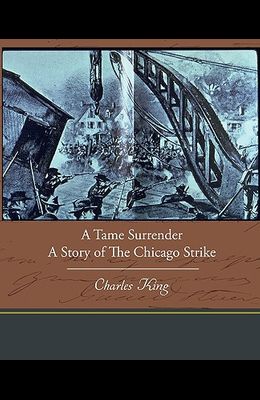 A Tame Surrender a Story of the Chicago Strike

Charles King was a 19th century United States soldier and a distinguished writer. He graduated from West Point in 1866 and served in the Army during the Indian Wars under George Crook. During the Philippine-American War, King was placed in command of the 1st Brigade in Henry W. Lawton's division. He led his brigade during the Battle of Manila and sailed for Santa Cruz with Lawton's division. Among his famous works are: Marion's Faith (1887), The Deserter (1887), From the Ranks (1887), Under Fire (1894), An Apache Princess (1903) and To the Front (1908). A Tame Surrender is an historical novel about the Pullman strike of 1894. The Pullman Strike was a nationwide conflict between labor unions and railroads that occurred in the United States in 1894. The conflict began in the town of Pullman, Illinois on May 11 when approximately 3,000 employees of the Pullman Palace Car Company began a wildcat strike in response to recent reductions in wages, bringing traffic west of Chicago to a halt