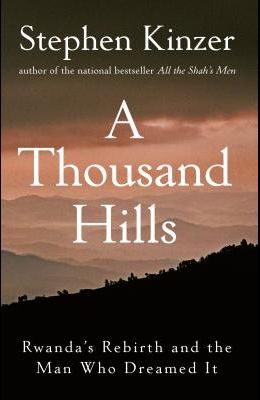 A Thousand Hills: Rwanda's Rebirth and the Man Who Dreamed It

In the tradition of Ishmael Beah's bestselling A Long Way Gone and Greg Mortenson's Three Cups of Tea, this book recounts the thrilling and uplifting tale of Rwandan President Kagame, who defied the odds to lift himself and his country out of misery toward a more promising future.

From the Back Cover Advance Praise for A Thousand Hills What a fascinating tale! What an inspiration! The courage and triumph of Paul Kagame show the beauty of reconciliation and of transcendent leadership. The world needs to learn his lessons, and Stephen Kinzer's brilliant narrative will help make this enlightenment possible. --Walter Isaacson, CEO, the Aspen Institute A fascinating account of the near-miracle unfolding before our very eyes: a country, Rwanda, rising from the ashes of genocide phoenix-like, and its President, Paul Kagame, who is making it happen. This is no hagiography, for he is depicted warts and all. . . . A very good read. --Archbishop Desmond Tutu Praise for Overthrow Kinzer's narrative abounds with unusual anecdotes, vivid description, and fine detail, demonstrating why he ranks among the best in popular foreign policy storytelling. --Washington Post Book World A jewel. --Chalmers Johnson Praise for All the Shah's Men A thrilling tale that pits two characters worthy of a movie against each other. --The Economist A very gripping read. . . . A cautionary tale for our current leaders. --The New York Times
From the front Cover In 1994, the world stood idly by as Rwanda was devastated by the most horrifying genocide since the Holocaust. Now this tiny, land-locked nation stands poised to stun the world again--but in a very different way. Killers and survi-vors have embarked on a breathtaking path toward reconciliation, and Rwanda has become one of the most promising countries in the developing world. How did this happen? In A Thousand Hills, bestselling author Stephen Kinzer tells the dramatic story of Paul Kagame, whose rebel army stopped the genocide and whose government has turned Rwanda into a new star of Africa. Kagame grew up as a wretched refugee, shaped one of the most audacious covert operations in the history of clandestine warfare, and then emerged as a visionary leader with radical ideas about how poor countries can climb out of their misery. Whether his experiment can succeed is a question that has begun to fascinate people across Africa and beyond. A Thousand Hills tells Kagame's astonishing story more fully than it has ever been told before. Drawingon extensive interviews with Kagame himself and with people who knew him at every stage of his life, Kinzer recounts one of the great untold stories of modern revolution. He traces Kagame through his years as a bitterly angry student, recounts his early fascination with men of action ranging from Che Guevara to James Bond, and explains how he built a secret revolutionary army in a way no one ever had before. With the dramatic flair that has led the Washington Post to call him among the best in foreign policy storytelling, Kinzer then traces the three-and-a-half-year war Kagame waged in the Rwandan bush--a war that stopped a genocide, changed the destiny of a nation, and set in motion one of the most exciting social and political experiments now under way anywhere in the world. Filled with harrowing tales of guerilla warfare, heart-wrenching accounts of the genocide carried out by the government of Rwanda, and inspiring stories of how a devastated nation can reinvent itself, A Thousand Hills is powerful, moving, and deeply compelling.